“Practice makes perfect” is a common phrase, but I’ve heard a much more realistic version from both martial arts and music teachers: “practice makes permanent.” Practice something wrong, and all you’re doing is cementing your mistakes. If you improve yourself each time you practice, you’ll eventually achieve perfection (or as close to as possible, anyways).

Personally, I’ve felt in the first few days that there was a lot practice going on with the sentences being presented by Glossika, but not a lot of improvements. Many of the sentences from the earliest days still sounded like a gibberish string of sounds to my ears yesterday, and therefore I felt like I wasn’t getting as much out of them as I could. So last night, I was thinking about this and decided I needed to add something to my studies to improve my comprehension of the audio.

After a bit of consideration, I decided that I should add the sentences I’m practicing through Glossika to first be introduced in Anki. Using the same card formats that I first mentioned in Still Waiting, I’m forcing myself as an introduction to the sentences to repeat after the speaker while the English translation is on my screen. I can replay the audio as many times as I’d like, and then once I think I’ve got it I view the back of the card. As long as my repetition was close, I count the card as correct. 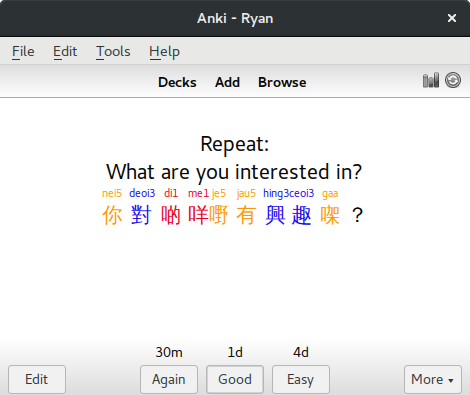 Giving myself time to repeat the audio as many times as necessary to get the sentences in my ear seems to have been very useful going into today’s GSR file. Many of the older sentences, I was able to actually start hearing details and meaningful words, even with Cantonese, rather than just a string of sounds that I couldn’t quite wrap my head around.

My current goal is to try to introduce 10 new sentences in Anki the day before they’ll appear in the GSR files. That way I have the chance to study the sentences twice (both the initial introduction in Anki and with a review the day after). More slowly, I’ll be doing transcription cards of the sentences in Anki as well. This is currently paced at 5 new sentences per day (per language), so that will quickly fall behind the GSR files. I think this will be OK, as that’s more of a supplement to the study than anything.