Finally got the course materials for my crazy Mandarin, Italian, Cantonese, Spanish language learning experiment. This blog post will be about what materials came in the course and my plan of attack. Shortly after, I’ll release another post detailing how day one of studying went. I probably won’t write a blog post for every single day of my Glossika course, but instead write a small summary of every day and release that every few days.

The triangulation Glossika fluency course comes to you in 7 different files. An pdf ebook and 6 directories of mp3 files.

The pdf contains a bit of helper information to get you started in each language, including a pronunciation guide listing the sounds of the language and how they’ll be written in the book, and some very basic grammar typology information about each language. This includes things like whether the language conjugates verbs, declines nouns, what tenses/aspect/moods the verbs have, if there’s gender in the nouns, and a few other basic things. What information is presented is rather inconsistent across the various languages, but still useful. 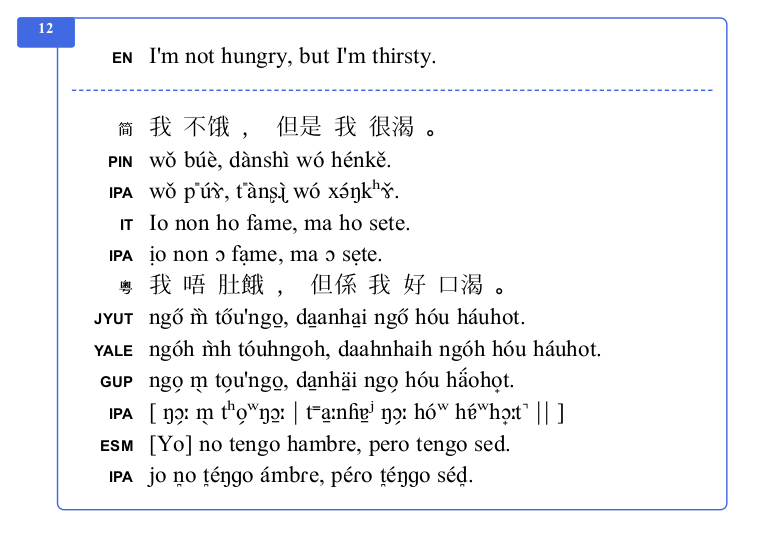 As you can see above, each sentence is contained in it’s own little blue box and contains all of the methods Glossika is using to write each language all thrown together in order. It’s a little difficult to read and separate the writing, since they don’t give any indicator marking where one language’s block ends and the next beings, but my eyes got used to jumping around as necessary pretty quickly in practice.

The 6 directories of mp3 files are 2 pairs of folders for each of the 3 levels of the course (the single languages are sold in 3 distinct separate fluency levels, they’re all sold together for the triangulation courses). For each level there’s a folder marked GSR (Glossika Spaced Repetition) and one marked GMS (Glossika Mass Sentence). I’ll touch more on the differences between these files and how they’re expected to be used throughout the reviews of the course.

All in all, I had to download over 6 GB of data, mostly in the forms of zip files containing large amounts of mp3s. Unzipped on my computer, it’s taking up about 9 GB of disk space.

Glossika comes with a study planner to help you use the course. As part of this, it helps you choose how long you should spend doing the course as a combination of weeks spent studying and number of repetitions to cement the information into your brain. For example, for someone who’s never studied a language before, they recommend doing the full course with all it’s reps over a period of 9 months. For someone who’s studied 2 or 3 languages studying a language unrelated to their previous ones, they recommend 5 months. 4 if they’ve dabbled in this particular language in the past.

If I were doing a single language version of this course, I would probably choose the 5 month intensive version of the course. This has you studying with the course materials approximately 90 minutes a day. However, because I’m doing the triangulation course with 4 languages, this would blossom into 3+ hours a day, which is rather unrealistic since I have a full time job and other responsibilities in my life.

A randomly picked day from their training course on the 5 month intensive schedule with my course would have looked like this:

Now, the same day picked from the 9 month training schedule:

Every 5th day in the 9 month relaxed schedule, they ask you to follow along with 50 sentences in the book, which are approximately 40 minutes a piece. For example, on Week 8, Tuesday, they ask me to listen to the GSR file 51 and follow along with the book for GMS-A sentences 501-550 (35 minutes) and do GSR-51 (63 minutes), totaling just over an hour and a half. This is still quite a time investment, but I believe should be a reasonable one.

The 9 month relaxed training course doesn’t explicitly specify for you to do any of the GMS methods except for type A (listen & repeat), but does recommend you do GMS-C (listen & transcribe) as you can. I’ll plan on trying to do approximately 2 GMS-C files a week, starting with week 2. However, this will probably the first thing to go with time constraints when necessary.