Despite not posting for the last months, I’ve still been regularly studying and practicing (most all of) my languages. In this post, I’ll detail both a new-ish type of flashcard that I’ve been working with over the last few months.

On the frontside, play a sentence in your target language and show a translation (into your native language, or another language that you know fairly well). Your task is to repeat the spoken audio. On the back side, there should be a transcription of the audio that was spoken and the audio should be replayed so you can read along with the transcription and the audio. If you were able to accurately repeat the audio, then grade it a 3, if you were mostly able to repeat it but might have mixed up a word or two give yourself a 2, and if you were only able to utter something that vaguely sounded like it but had no idea what words were coming out of your mouth, grade it as a 1. 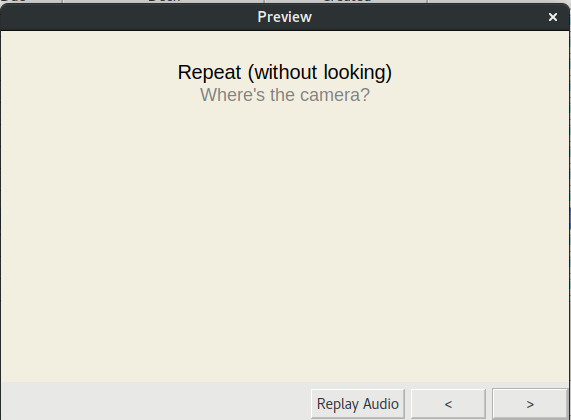 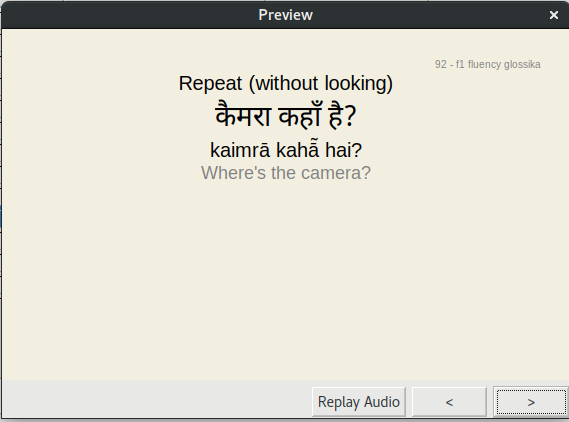 Benefits of the “listen-repeat” flashcard:

I’ve found that these flashcards work similarly as to Glossika’s GSR files, where it gives you a method to understand the gist of what’s about to be said (the written translation in the case of these flashcards, and spoken in the case of the GSR files) which helps your brain get ready to parse what might be about to be said, and then also forces you to actively listen to what’s being said so that you’re able to accurately repeat it. This gives you the benefit of assisting you in listening and actually participating in content, which is great for making stronger mental connections.

I’ve been using these cards for the last few months now for studying Hindi, Mandarin, & Spanish, and have found them to be very helpful. The majority of my cards have been generated by extracting the sentences from the Glossika courses for these 3 languages, but I’ve also converted the cards from the shared Spoonfed Chinese Anki deck into this format (which you can do by just modifying the card template after downloading that, if there’s requests for it, I can upload my copy of this).

How does it compare to Glossika’s GSR files:

First off, I want to say that I still think Glossika is an amazing resource for any language. If they have a course for the language you’re interested in, especially if it’s a lesser taught language like say Armenian or Indonesian, but even for the languages where there are a large number of resources it’s still worth the money. That’s because the learning languages with sentence-level context really seems to work as a way to passively learn grammar and vocab. So this method of utilizing their content, is not meant to be a replacement, but if you can source a large number of sentences in another manner, it’s totally worth a shot.

For a language like Spanish, where I’m already at a semi-conversational level and can fluently read, I think that the existing Glossika method is probably superior. For languages like Hindi where I’m a complete novice, and have never studied any Hindi prior to buying the Glossika course? I like the Anki method better. This is because with the Anki method, I’m getting constant feedback via a written form to let me know what I actually heard. For Spanish, I rarely get the listening egregiously wrong, and it’s close enough that a few more repetitions are all I need to correct it. For Hindi, I rarely hear it right the first time, and need to correct it multiple times per sentence before it starts to stick.

Doing this via Anki has some additional benefits. One is reviewing previous sentences, which is something that Glossika never does. Their argument seems to be that you don’t need to review older sentences, because new sentences build off the old ones, so despite not reviewing the exact sentence in the future, you’re still getting re-exposed to the grammar and vocab from the older sentences on a regular basis. This is probably a very valid argument, but it does feel nice to review the old cards, even if it may or may not be a mild waste of time.

Another benefit to the Anki method is it allows a more flexible pacing. In Glossika’s method, the smallest unit of study is either a lot of manual work via the GSA files, or a 25 minute long GSR file. It’s difficult, if not straight up impossible, to one day add 10 new sentences and another when you’re busier, only add 5 or on the weekend add 20.

If it’s not better than what Glossika provides, why are you doing it?

To be completely honest, the main reason I’m studying with this method now is that my wife gave birth to a baby last week. I have a bit of spare time, but only in baby-dictated chunks. The GSR files are difficult to study in chunks, but with Anki I can walk away and come back as many times as my daughter (or wife) requires. I can study with this method on my computer, or just on my phone while cuddling on the couch. I’d started studying with this method a few months ago in preparation for Eliana’s arrival, and at least for the first 8 days it’s paid off.

My daughter loves to be held, and I can use one free arm to use Anki. She gets calmed by hearing my voice, and she’s being exposed to multiple languages while studying them with me, hearing both the native speakers speak the sentence and hearing her daddy repeat. So for now, this is an ideal method for me to study new languages.

The other potential benefit is that I have amassed a decent quantity of sentence audio with transcriptions and translations in languages that Glossika doesn’t currently support (like Tamil), and had been wondering how I could utilize these for my own Glossika-like course. So far I haven’t had the time to add any of these except the Spoonfed Chinese sentences, but that’s only because I don’t have time to start seriously studying another language right now.

« What should you be reading? Learning to Learn Languages is a Journey »